About The Pasta Factory

The Pasta Factory was originally opened in 1976 by Mike Kroenke and Dennis Harper at the Crossroads Shopping Center. Four years later in 1980, the restaurant was bought by Richard Otto Maly, a MU alumni and restaurant employee.

In 2001, long time employees Jason and Jennifer Dubinski became the newest Pasta Factory owners. And for 25 years, The Pasta Factory enjoyed its place in history on the corner of Hitt Street and Broadway.

The Dubinskis decided to downsize in 2011 to seek more parking for their customers, so they moved west on Broadway into the Fairview Marketplace. They brought all the original fans, booths, bar, stained-glass, vintage novelties and mementos which were at the original Pasta Factory location.

Jason, Jennifer and their staff welcome you to The Pasta Factory, Columbia's original Italian restaurant since 1976.

From Chicken Florentine to Lobster Ravioli, Shrimp Scampi to Pasta Jambalaya, we designed our menu to satisfy all taste buds. All of our entrees are made to order from fresh ingredients and served a la carte with bread and butter. Try our open-faced Italian for lunch, a great happy hour, or for dinner choose from our famous House Specialties. Call us for pick-up, or stop by and enjoy a relaxing meal. 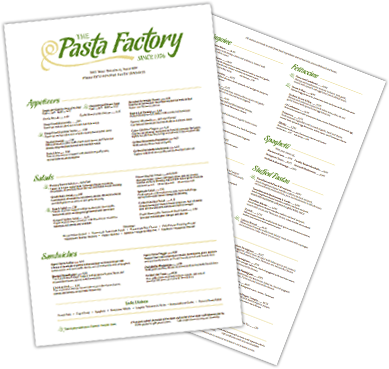